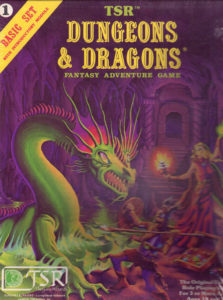 If you’ve never played a live-roleplaying game before, you’re probably wondering why all the buzz about these things?

I grew up playing Dungeons & Dragons starting with the 3rd edition basic set in 1977. Throughout my childhood, I’d pretend to be an adventurer-cleric exploring the wooded swamp behind my home, fending off the imaginary skeletons and trolls with my decorative shield and meat-tenderizer mace.

I had some pretty cool adventures on my own. Ask me about the owl or the buried treasure sometime. I still can’t find that treasure.

While I adventured, I always imagined, “what if.”

What if I could create a live D&D game where others could play together? In 1982, Mazes & Monsters came out, and that got me thinking maybe I could do something like that. I was still a kid, and “the dream” remained just that until I heard about the IFGS (International Fantasy Gaming Society) and realized it already existed.

I still had no idea where to begin.

Around 1989, my best friend and I met some new friends (Brian, Howard, and Jim) who were running a live roleplaying game called “The Adventure Game.” This game became part of the foundation of my live-gaming point of view, emphasizing simplicity and roleplaying.

This experience was just the beginning.

From the Adventure Game, we discovered The New England Roleplaying Organization (NERO) run by Ford Ivey. PM Magazine had just featured them on national television, and their game was booming with hundreds of players. The people made the game exciting, but the growing complexity of the game eventually pulled me in another direction.

I left playing and NPCing at NERO to help start Legends Roleplaying. Bill and Tom’s philosophy was rule simplicity, and they stuck with that. Legends was easy to roleplay because you didn’t have to worry about numerous rules. I ended up playing Legends for years and eventually retired my character because it was too powerful for the game.

After Legends, I became one of the creators of Fantasy Quest along with Brian and Glen. It was a fun game, but differences in opinion led me in another direction. After a few years, I decided I needed to strike out on my own with a game I created.

Mythical Journeys (MJ) was born in autumn of 1996 doing what I’d hoped it would: raising the bar on live roleplaying games. Thanks to the people involved, it became one of the most talked-about live RPGs and “the standard” many other games used to gauge themselves. It was a crowning achievement.

During MJ’s first ten years, the rules were worked on by a rules team and became increasingly complex. We selected a new team to revise and simplify the rules, but they ended up becoming even more complicated. Don’t get me wrong. Mythical Journeys is a fantastic game. Some people enjoy deep, complex game systems with lots to discover. I’m just not one of them.

In my experience, I’ve played and NPC’s at more than 17 games. I did this to get a better understanding of what made LARPing fun. Who was doing things right or better and who was missing the mark completely. I interviewed numerous people to see what they liked most about live roleplaying games and what they hoped to see in the future.

I started to outline the familiar themes games faced and figured out how to overcome those obstacles. I created Myth intending to go back to the basics of roleplaying without losing the innovations I created along the way. In fact, the Myth Logo is an homage to the dragon on the 1981 Dungeons & Dragons boxed set. Excellence should be a journey and not a destination. We will always strive to raise the bar, outdoing what we’ve done in the past.

Today, Myth is more than just a dream I had as a child. It is a community of friends who share a passion for interactive play. It is a place to build friendships that will last a lifetime, network, or maybe even find the one. If nothing else, it is a place where we can escape for a weekend several times each year.