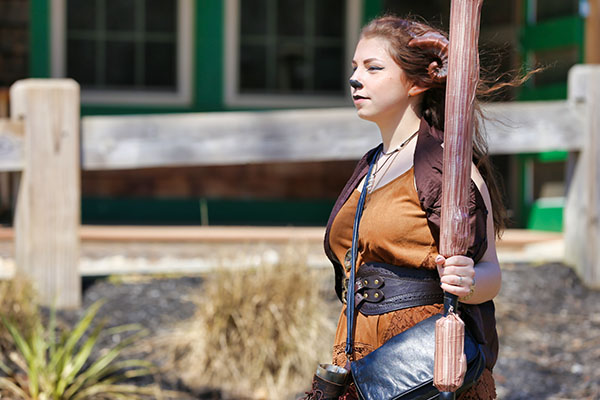 GET OUT AND ADVENTURE

As a participant in a live fantasy roleplaying game, it is your responsibility to participate in the game actively. This participation means being aware of your main goals and acting on them every event. It’s a live roleplaying game, so talk to players and NPCs. Ask questions that relate to your goals and follow up on leads. If you’re not getting any traction, change things up by talking to different people. Keep writing about your efforts in your feedback letters.

Your actions are what define your character, as most people you interact with at events haven’t read your detailed 20-page character history. Your history is more to help you identify your personality and actions. If you want to bring your character’s back-story to life, you need to talk about it during the game and do things to make it real to others. Do the things that make your character what it is. If you’re a fighter, fight, or train to fight. If you’re an alchemist, search the forest for ingredients or hire someone to do it for you. Showcase who you are and what you do. That is how you’ll become more.

There is a game actors play when practicing improvisational drama. It is called “Yes, and…” The goal of the game is not to negate what the first person said, by following up their statement with, “yes, and…” before you state your comment. Let your companions take action and support them with a “yes and…” type of gameplay style. It can be more fun to deal with the ramifications than it is to always negate them with a “NO!” playstyle.

Don’t be one of those people that are always saying, “My character would never say (or do) that!” Think of the “Yes, and…” game again, and find reasons why your character might. Allow yourself to encounter awkward situations outside of your character’s comfort zone. Take chances. Your character is part of the story, but you are not THE story, so be sure to work with your group. Find ways for your character to fit in. If you can’t find those ways, you might want to consider joining another group.

You probably never thought you’d hear it from me, but we said it: Avoid confrontational PVP if you can. Most people accept the fact they will always be racing against other players to find that unique magic item, get to the gem mine first, bid higher at an auction, or participating in different sorts of passive PVP. It is the confrontational PVP they dislike. The PVP that forces them to do things like kill off your character because you tried to rob them or the fact you actively worked to kill off a character they’d spent years developing. Of course, if they’re engaging in PVP to bring you to that point, perhaps they got what they deserved.

DON’T BE A RULES LAWYER

Knowing the game rules is a benefit for everyone involved, but if you have to argue the meaning of a rule for almost a minute, you’re likely a rules lawyer. People that intentionally play on the spirit of a rule take the fun out of the game. If a rule is wrong or doesn’t work, write it up in your feedback letter. Don’t make everyone miserable by going on and on about a rule during the event.

PAY ATTENTION TO THE GAME

If you find yourself frequently slipping out of character, checking your phone, or doing things that aren’t related to the game, it might be time to take a break. When you can’t focus on playing, consider getting in your car and heading off-site for a bit. You should do that rather than draining the fun from everyone else who wants to remain in character and play.

BE EXCELLENT TO EACH OTHER

If your in-game actions offend someone out-of-game, apologize, and talk to them about the situation. We’re all friends here, and nobody will think less of you for doing the right thing. I think more highly of people who are willing to do what it takes for personal betterment, the Myth community, and the relationships they have with others. Those are the real heroes in the game.

BE PART OF THE STORY

The game’s plot writers are actively writing plotlines to help tell a story. The reality is you’re doing the same thing. Make sure you take the time to write a brief feedback letter that summarizes what you did at the event. Don’t forget to let them know what steps you have made toward your goals (who you talked to, what was said, what you might do next, etc.) Don’t write so much that your actions become difficult to follow.

BE READY TO FAIL

Nobody likes to lose an encounter, but the reality is it happens. Sometimes we’re outnumbered, or the monsters are just far more robust than we expected. If something didn’t work out the way we planned, we need to reflect on what didn’t work or investigate other options. Most importantly, we need to understand that failure is just another way to learn, and even character death is part of a learning process. Pick yourself up, dust yourself off, and start all over again.

Myth is a game comprised of many elements that make it fun. It’s a place to hang out with friends in a recreational activity we’ve agreed to do together. Collectively we are telling a shared story that is about all of us with no focus on anyone in particular. Step back for a moment and forget about your character goals or the secret meeting you have at the next event. Do what is best for the game and the overall collaborative story. Sometimes that even means losing as part of the hero’s journey.

Try to remain active at events. Have a positive attitude, do exciting things, and be the hero that changes the world for your friends around you. If you can’t walk away at the end of the event with at least one good memory, then we have let each other down.